Come visit us in beautiful Jeffersonville, Indiana, with easy access to nearby Louisville.

“Lots of friends and plenty of luck and the good fortune of being born in America. That is enough career for anyone.” 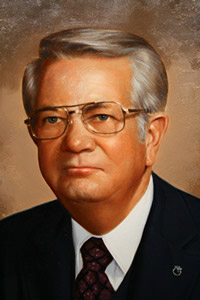 This is how William Harold Pierce summed up the highlights of his very interesting career. This is typical Pierconian. He led a very busy life exhibiting boundless energy and taking plenty of time to serve not only his beloved Oak Cliff, but metropolitan Dallas as well. He was known throughout Dallas as an outstanding individual, and was recognized nationally as well.

William Harold Pierce, known to his many friends and colleagues as “Bill”, was born on July 17, 1909 in Carbondale, Illinois, the son of Mr. and Mrs. J. F. Pierce. He furthered his interest in the mortuary field by attending the St. Louis School of Embalming in St. Louis, Missouri. He married the former Gladys Naylor and upon moving to Dallas, Texas, they decided upon Oak Cliff as their future home.

Upon moving to the Oak Cliff area, Mr. Pierce established his own business in the middle of the 1930’s - a dangerous period for any man to venture into business for himself. But he had courage and faith in America. He founded the Morticians Supply Company with an initial investment of $5,000 in Oak Cliff when the suburban area was far from being the large “city within a city” that it is today. But he had the courage of a born leader and a really outstanding businessman, and within a brief time, he was on the high road to business success. As Chairman of the Board and Chief Executive Officer of the Pierce Companies, he saw his company grow from a small firm that served only the immediate area around Texas to one of the largest embalming chemical and funeral" supply companies in the world. In 1990, Mr Pierce acquired the Royal Bond Company in St, Louis. This brought him full circle because he launched his career in the funeral supply business with the Royal Bond Company in the 1930s. Along the way, the Armstrong Chemical Company, the Naturo Company and the Eureka Company have also become a part of Pierce Companies. With this enormous growth has come the establishment of Pierce Chemicals Royal Bond product centers not only in Dallas, but in Atlanta, Georgia; Jeffersonville, Indiana; St Louis, Missouri; and Los Angeles, California.

Mr. Pierce’s vision did not stop with just a successful company, however. Keenly interested in research and education in the mortuary sciences, he was also Chairman of the Board of Trustees of Pierce Mortuary Colleges, which consists of three of the leading funeral service colleges in the country.

His interest and efforts in mortuary education were not isolated to his own three schools, however. Going back just a few years to a time when there was a definite possibility that the entire structure of the national accreditation of all mortuary college might collapse, he helped materially in the restructuring of the American Board of Funeral Service Education and the successful resolution of problems among the various organizations that comprised the American Board.

Early in his business career, Bill became intensely interested in the Optimist Club, a service club whose members specialize in taking the most optimistic view of things and also of doing good to their fellow man by putting into practice their happy view of life. Bill Pierce was not only just a member of the Optimist Club, he was a born optimist, and his friendly greeting and broad smile showed his real character. He managed to always keep his good humor and optimistic outlook on life — factors that helped him through many a tough spot in a busy life. He was the youngest man to be elected as President of Optimist International.

As a leader in civic, community and social endeavors, Mr. Pierce was one of the busiest men in Dallas, participating in all the diverse undertakings that came to his attention. As a businessman, he started out as an entrepreneur in the truest sense of the word, causing situations and circumstances under his control to grow as only he was able to do. An an educator, Mr. Pierce never sought anything less than the best, which was indicative of the whole person W. H. Pierce; whatever he did, he gave it his all and sought only the best for those involved.